Today was a day we both look forward to and dread. It is so nice after we are done but it is so much hard work to do. Cleaning out the pond usually takes all 4 of us about 4 hours to do. Today was no exception. 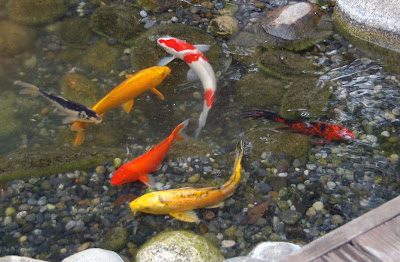 Every year we are surprised by what we find. This year we found a second bullfrog that we had no idea was living in there. As usual, the plants had taken over and needed to be cut back. The fish did well being moved to a temporary home (A big garbage can) but are happy to have their home clean. 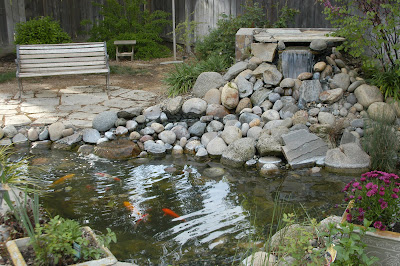 The day was pretty rough on me. We have some heavy rocks that cover our water fall box. I was standing on top of the waterfall moving the rocks so I could clean the filter pads and I slipped and fell into a rose bush. That kind of hurt and I broke the bush. 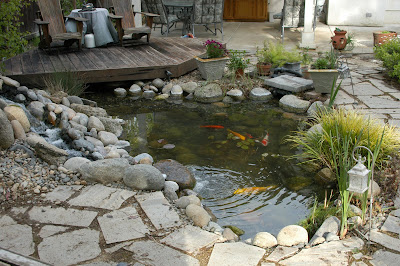 When it was all done, I was pretty tired and dirty. At least we can enjoy it until next March. 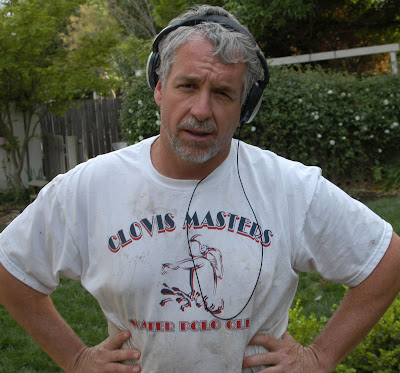 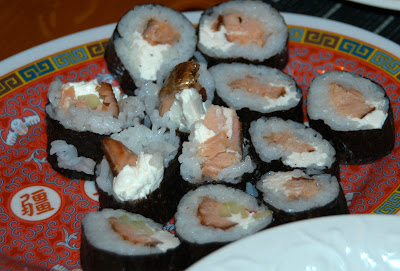 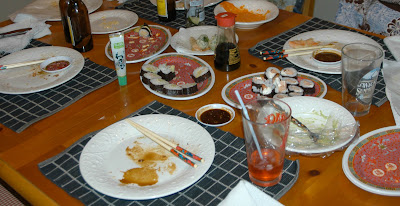 So, around the Weaver house, there are a couple of things that are held in high esteem. 1. Jesus. 2. Family. 3. Taco Nirvana Night. 4. Sushi Nirvana night. On Friday, the Camerons came over and we had sushi nirvana. This consists of two parts. First, Jim C. makes tempura then I use some of that tempura to make sushi. On this evening our menu consisted of 6 different items.

Stations of the Cross 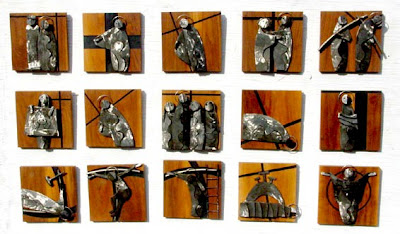 Yesterday was Good Friday and the whole family went to church for the Stations of the Cross. It was very moving to go through each step that Christ followed on his way to the cross. I was the first one to get through so I had some time to think by myself while everyone else finished up. It made me wonder how we (as Christians) ever got away from things like this. I mean, if you think about it; not many churches outside the Catholic church do a Stations of the Cross. Where did all the stained glass go? Why did we loose a lot of the tangible practices? I can recognize that when Martin Luther broke from the Catholic church, ritualism was part of the reason... but to loose all of the tangible practices of Christ's love for us... why? I thought that yesterday was a great experience for myself and my family.
Posted by The Weaver's at 6:47 AM 2 comments: 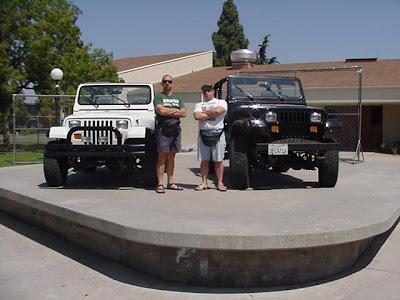 Back in 1991 I bought my first Jeep. My buddy "The Lose" had one too. It was fun and we did a lot of cool stuff in our Jeeps. Well, I sold my car earlier this week and bought another Jeep. Here it is. 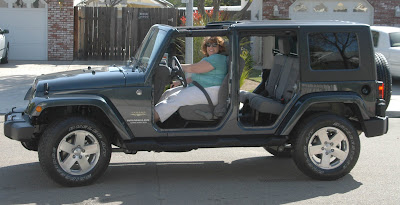 They sure have changed a lot since 91. Gone are the kidney jarring hits as you go over pot holes. It is pretty plush and I am scared to take it off the pavement. If you have ever owned a jeep you will understand about the "jeep wave" . I am glad to be part of the club again. When I had my little sports car, it was "my car." Now that we have a jeep, it is not called "my car," it is called "the jeep." As you can see, The wife left first this morning. I guess I need to set my alarm tomorrow!
Posted by The Weaver's at 10:55 AM No comments: 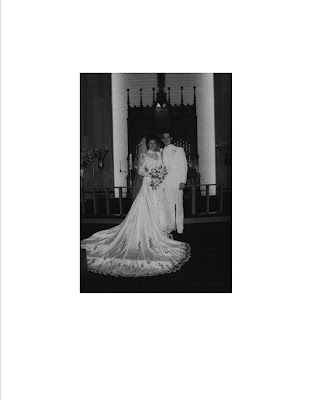 19 years ago today, God blessed my life by allowing me to marry my best friend. Here is looking forward to many, many more years spent with my best friend. 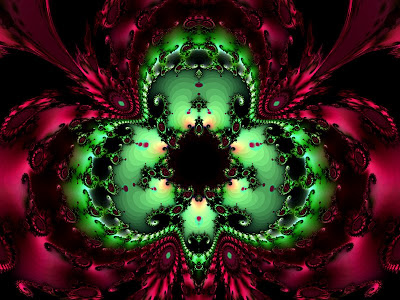 "Therefore, indeed, I cannot keep silent, nor would it be proper, so many favors and graces has the Lord deigned to bestow on me...our way to repay Him is to exalt Him and confess His wonders before every nation under heaven."
Saint Patrick
Posted by The Weaver's at 3:46 PM No comments:

This is an awareness test. See how you do?

I am not sure how to feel about today. In December 0f 2000, I bought my "dream car". I had saved up, took some chances with the stock market that paid off; and bought my mid-life crisis ride. It worked out for the last seven years because the kids were at different schools or had different pick up times. Well, this year, both kids need to be picked up at the same time so this car just does not work out. (2 peeps only) 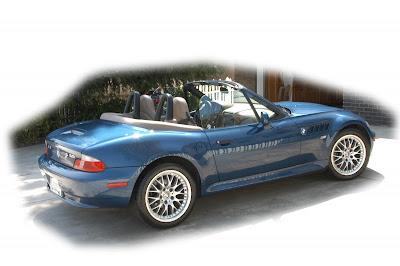 Well, this morning I met a buyer at work. He looked it over, drove it and about a mile from the school said "I'll take it". No counter offer. No bartering, just "I'll take it". He gave me a cash deposit and headed to his bank. He will return on Tuesday to pick up the car.
Next car??? Four qualifications: 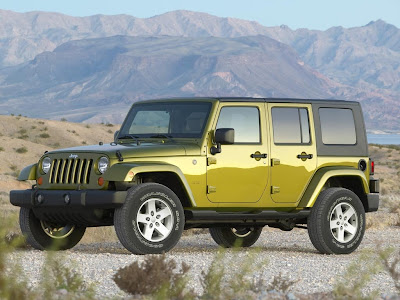 What is up with New York? 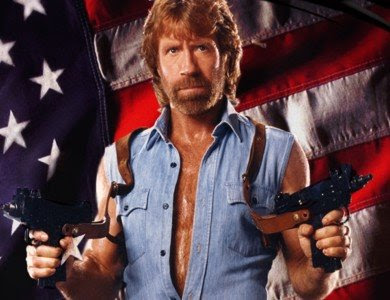 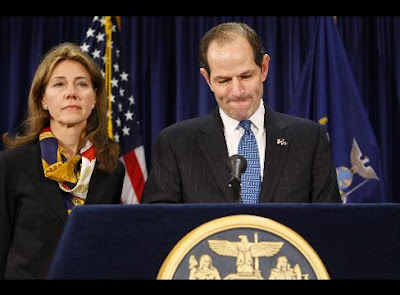 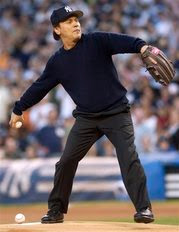 If you have been watching any news this week, you probably have seen two stories; both out of New York. Giuliani worked so hard to get prostitution out of Time's Square and now Governor Spitzer brings it back. He resigned today by the way. 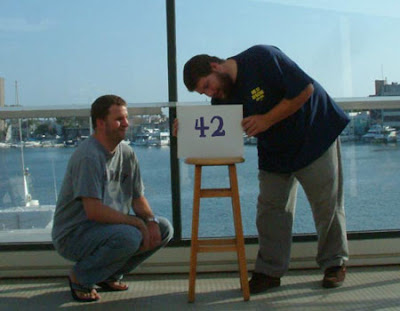 Saw this and tried it out. Very fun. It will probably end up killing my keyboard but what the heck. See how many you can get here.
Posted by The Weaver's at 3:42 PM 1 comment: 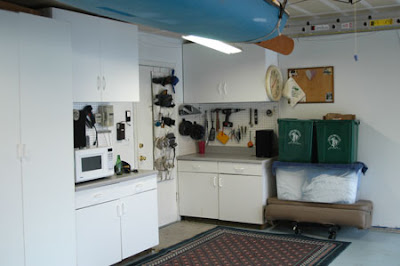 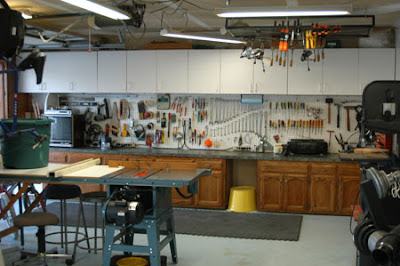 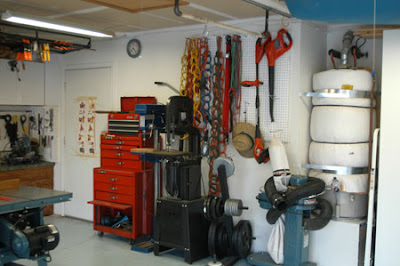 If the kitchen is the domain of the woman, then the garage is most certainly for the man. My garage has been an ongoing project for the past 10 years. One of the first things I did to this house was to apply epoxy to the garage floor. I got some kitchen cabinets courtesy of a friends remodel. I bought some other cabinets and I made the tall ones. I was cleaning out a cabinet and found some paint that was close to going bad. I think it was the color our interior used to be, but either way; it was either throw it out or use it. I decided to paint the walls of Man Central. I think that my garage is finally the way I want it to be. I have a stereo, TV, DVD player, Microwave oven, (a guy might just need some wings while in the garage) 3 different areas of pegboard, 2 phones (one on each side) and lots of super bright lights. The woman said it was nicer than her kitchen and she is probably right. Man Central Rules!
Posted by The Weaver's at 4:31 PM 2 comments: 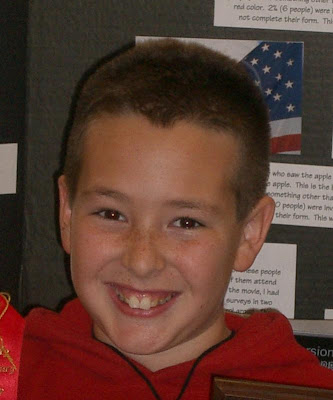 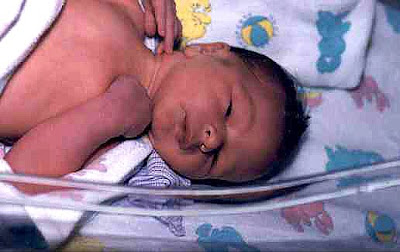 This picture was taken 11 years ago today! Our world has been blessed in so many ways since God gave us you! You have grown into such a fine young Christian man. Daddy and I could not be prouder of you! Happy Birthday Buddy! 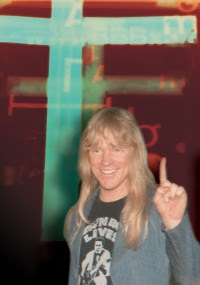 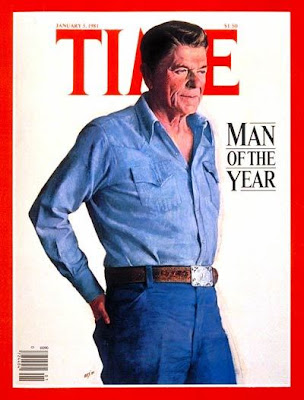 My friend Dave sent me an article today about Larry Norman & Ronald Reagan. If you have ever gone out to dinner with me, you know I always give the name Reagan if we cannot be seated right away. I think that President Reagan is one of the greatest Presidents ever because he preached doing the right thing, even if it was hard. I often wonder if Nine-Eleven would have ever happened under Reagan's watch.
When I read this article, I decided to share a couple of excerpts with you. It is a bit long but worth the read. Here goes:
When I saw a man with that familiar long blond hair checking in at the hotel registration desk of the Washington Hilton Hotel I was stunned. Was Larry Norman, the anti-establishment Christian rock musician really planning to attend this most conservative Christian gathering ?
When I approached Larry he said he had just arrived from a performance at Eastern Mennonite University, in Virginia and was simply spending the night before flying home in the morning. I was interested in talking with him and asked about having lunch together.
I had a memorable conversation over lunch with this man whose talent and activism I admired. During our conversation I mentioned President Ronald Reagan would be at the hotel that very afternoon to address the convention, and if he were interested I could possibly arrange for him to attend the event. I said I didn’t suppose he would be interested in seeing President Reagan, but that Pat Boone would be singing as well. I had heard Larry and Pat were friends.
To my astonishment, Larry said, « Could I see President Reagan ? »
I was stunned that Larry could be anything but an anti-establishment guy like me, and answered, « Do you like President Reagan ? »
He said, « Oh, I do. I voted for him. I think he is the greatest President we have ever had ! »
I was shocked.
He then said, « It was Winston Churchill who said, ’When you are in your twenties, if you are not a liberal you do not have a heart. But when you are in your forties, if you are not a conservative, you don’t have a brain !’ I am nearing forty. »
Larry did attend that gathering and President Reagan delivered a powerful address that challenged us all to take a stand for right, no matter the cost.
The complete article is available here if you wnat to read the rest. http://www.spcm.org/Journal/spip.php?article15662 I am still sad over Larry's passing this past week but it is good to know that I will see both he and President Reagan again one day.