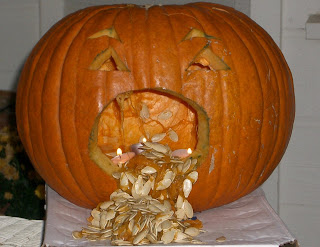 Here is what Mr. Weave and the youngest did while the oldest and I (Mrs. Weave) made albondigas (Mexican meatball soup).
Posted by The Weaver's at 6:21 PM No comments:

Well, today I worked my first shift on the tech team at our new church. It was really weird. The lead guy had me meet him really early (6:30am) and spent about 10 minutes going over how my station worked. I spent the next 90 minutes just kind of sitting around and chatting with the other tech people who were there. Speaking of my station, I was the "switcher" for the service. What that means is that I am the sole person who controls what content goes up on the two jumbotron screens and all of the various TV sets around campus. If this were TV, that position is called the director. In case I didn't mention, this was my first shift at this new volunteer job.
Next, we had a tech meeting and amazingly; the head pastor attended. The whole idea of everyone meeting first to prepare and make sure we were on the same page was foreign to me. I though that was really cool because if I wanted to, I could ask the pastor questions about his sermon before he began.
I do have some experience doing this kind of work, but at another church and on very different equipment. I kind of thought the head guy would spend his time hanging around and checking up on me. This is the part where today kind of felt like my first day of student teaching. (My first day of student teaching went like this... Master teacher: Class this is the new student teacher Mr. Weaver. Mr Weaver, this is your new class. See you in June... Mr. Weaver: Uhhhh?) Well, the head guy, who by the way is named Randy had enough trust in me that he spent much of my busiest time working on his fa 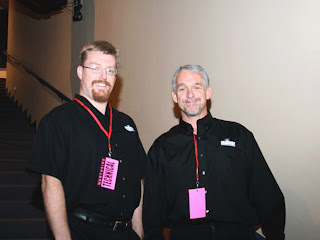 ntasy football league. I really was not sure if this was because he believed me when I told him about the work I did at my previous church or if he is just that laid back. It was kind of nice in a way because at my old church, any small mistake made by any volunteer or paid person was likely to result in an instant and public chastising by the head pastor or the lead tech person. Come to think of this, today was kind of nice in that regards... just strange.

Here is a picture of me and my buddy Ryan doing tech stuff at my old church. I sure do miss all the people at my old church but I sure don't miss being yelled at in front of 1,500 people.
Posted by The Weaver's at 4:06 PM No comments:

The new phone books are here.

Today I was the first one to arrive at school and I was so happy to discover that the new phone books had arrived.

Here is something I saw this weekend that was funny.

This weekend was supposed to be spent surfing some nice head high or bigger waves and dining on lots of fish and chips but instead it was filled with sadness. Mrs. Weave's dad ended up in the hospital. (Yesterday's post) We have been putting off getting a dog for the kids and decided to get one this weekend since we were not going out of town anymore. We went to the pound and picked out a nice looking mutt. When we got her home she was cute and lovable but had one big flaw... she could not help herself around our Koi pond. We tried and tried to keep her out. I put her in the kids play area and she promptly ate a 12 inch hole in the wood fence, got out and went after our fish again. We tried and tried but she was very adept at escaping. In the end, we decided that since we could not supervise her 24/7; we had to take her back. The kids took it ok but I was very sad. The weekend ended on a couple of good notes. Mrs. Weave's dad is doing much better and may be able to come home in a few days. Today I sat in with the tech crew at NewCov and was very happy to be behind the scenes again.

Here is something cool I found that made my day better.
Posted by The Weaver's at 5:05 PM No comments:

Here is something I did this summer when the kids were bored. I taught the oldest how to edit and then he did all of the tedious rotoscoping for the special Fx. I helped him clean everything up and then we both added sound.

Today just as the shrimp was coming off the barbie, we got a call. Mrs. Weave's dad was not doing well and mom needed help. Long story short and an ambulance ride later, he was in the hospital. The prognosis looks good but what an experience that was.

After my hospital visit tonight, I have decided two things. One, almost everyone who is a customer at the hospital emergency room likes to smoke. Tonight as I was just hanging around while Mrs. Weave and her mom were in the room with her dad, I watched people carry their barf basin outside so they could puff away in between puking their guts out. It makes me wonder how much smoking is tied to why they are in the ER in the first place. Two, I am glad that I never did become a doctor. The whole place was just sad. Everyone was sick. Some were moaning. Kids were crying. That would be a tough place to work.
Posted by The Weaver's at 10:34 PM No comments:

Sure hope that we are.
Posted by The Weaver's at 8:50 PM No comments: